A Sociologist in a Strange Place: What I Wish I knew about ‘Going Corporate’ 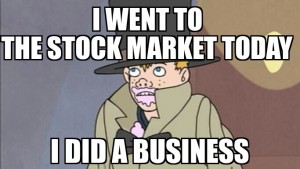 It has been a year and a half since my last post, where I argued that folks with advanced liberal arts degrees (MAs and PhDs) had  a lot to offer “the business world”. I composed it while I was trying to transition into that space from academia. Months later (after many interviews and exhausting all of my social contacts), I ended up exactly where I thought that I wanted to be, in “business”.

I only managed to make it there for about 5 months.

Although I was doing reasonably well performance wise, I decided to leave because I was basically a fish out of water… or at least a fish in really unfamiliar water, where I didn’t know any of the other fish.

Also, I was doing far too much bathroom crying.

To be clear, I still stand by what I argued in May of 2014. We (liberal arts academics) do have plenty to offer, and perhaps if I had ‘toughed it out’, I would have reached a point where I came to define my experience as ‘successful’. That said, there are a few things that I wish I knew before immersing myself in a corporate environment. These are anecdotal, so they are not necessarily generalizable.

But, for what it is worth, here they are:

You will automatically perform an involuntary institutional ethnography, and nobody will care about your findings.  Coming from Sociology, I immediately problematized my new environment. Within the first month, I had critically taken account of the power relations of all the players, and the processes. I was full of recommendations to make the space more productive and egalitarian.

When I shared my insights with selective new colleagues, they were mostly incredulous. Either they had already had the same insights, and felt I was precociously naive about the power that employees might have to alter the corporate structure, or they felt that I was complain-y, ungrateful or bratty.

Although not always the case, being critical of your institutional environment was rewarded in academia. At the very least, you would have support from colleagues or fellow grad students. And, when enough people agreed with you, you went on strike.

Don’t even joke about unionizing. Your colleagues will become immediately uncomfortable.

You cannot take it for granted that your colleagues share (or are even sympathetic to) your politics. I learned this when I threw down (what I thought) was a clever dig at the (then) Harper government.

It was not well received.

That was the first time I met conservatives (irl)  who were under the age of 40. I’d heard of them, and I knew that they existed, but I had never actually (knowingly) met one.

It was a defining moment. You never know an implicit social rule, until you violate that rule. Coming from academia, especially in Toronto, I had never encountered a colleague that leaned to the right. Where I came from, overt irreverence towards Harper was commonplace, and not contentious in the least.

There’s so much that I could say about this– the politics. But, it is worthy a distinct post.

Language use is shockingly different. What is taboo in scholarly settings, is fair game in business contexts, and vice-a-versa. You may hear colleagues, and superiors use words like “chick” or “broad” to describe a woman. I once heard a colleague refer to someone’s “gay lover” (a term I haven’t encountered since I had watched Phil Donahue in the 90s). To me, it was shocking to be exposed to these words in a professional context. It would have been unheard of with my former colleagues.

The same rang true for me: references to “my partner” were met with scepticism from my new workmates (who correctly read me as straight and cis). Years ago, when I started the MA program, I learned to stop saying “boyfriend” when I spoke of my S.O. and use “partner” instead. It was considered to be more inclusive, and thus professional considering the context. This was one of the ways that going corporate was undoing my previous professional socialization processes.

There are also “business buzzwords”, like “buy-in”, “circle-back”, “best-practice” and “scalable”, that I never quite got used to. And imho they are mostly bullshit.

These were just a few of the many lessons I learned during my career transition. Although it was not a good fit for me, I was grateful to have the opportunity to experience a sample tasting of the world of business. Even though they were different from me, in ways that I wasn’t used to, I liked them.  And, the experience opened my mind, ultimately forcing me to flex my atrophying sociological muscles. Since then, my career has been defined by “hustling”, like many other Sociologists Outside the Academy (SOAs).

I’m more optimistic about career outside academia, because I am increasingly becoming aware of a growing number of people in my position. As a friend recently reminded me, we are smart, creative, and we have place. And if we can’t find that space, we will have find a way to create one.

So glad to see you posting again. Missed your insights!