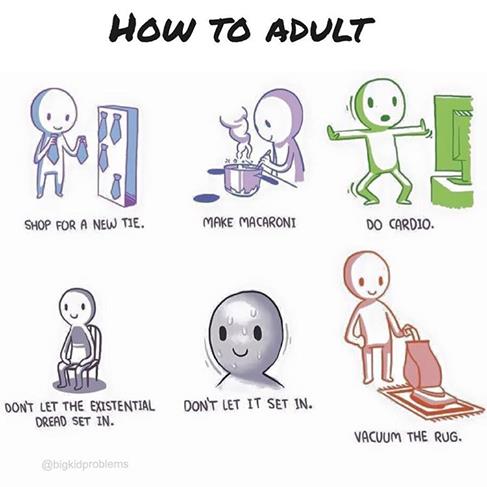 I’m really starting to come to terms with the fact that I am quickly approaching middle age. I have spent a great deal of intellectual and emotional energy telling myself that middle age is literally the middle of one’s life, and as Canadian woman, my life expectancy is over 81, thus I (a fresh-face 36 year old) still have 5 more years until I am technically in the middle of my life. Thus, I remain a young woman.

But, after awhile it becomes difficult to deny– you get ma’am’d a few too many times at the grocery store, or all of the sudden your friends know all of the tricks involved with getting botox treatments covered by insurance. In any case, the evidence that you are pretty much middle aged starts to mount and becomes impossible to deny.

This stage of life is experienced differently depending on who you are and where you live. My unique brand of middle age can be described “suburban woman”. Here is the (non-exhaustive) list of clues that you might also be approaching middle aged suburban womanhood.

1.The insidious encroachment of Activewear in your closet: All of the sudden most of your clothing is activewear (like 75% at least). To this end, the Internet imposes Fabletics ads (which have taken my feelings for Kate Hudson from neutral to disdainful) on you everyday via social media, and all of your peers (fellow middle aged suburban women) exclusively post photos of them exercising, about to exercise, or leaving exercise. You will also notice that a consensus will slowly develop among your friends that activewear is appropriate all of the time, no matter what you’re doing. Dinner? Leggings. Lunch? A Tank and a sports bra.

Basically if you are a woman aged 35-45, you must always be prepared for exercise, whether you expect it or not, because if you stop moving, you might die.

2. Alcohol: We all still like to drink, but our approach is different than it was in our 20s. We have gone from drinking beer and shots in the bar while wearing Destiny Child’s (circa 2004) inspired low rise flares, and backless handkerchief ‘shirts’, to drinking a reasonably priced vintage Argentinian Malbec on the couch.

What remains consistent is the fact that no bra is required.

3. Your view of the past: I found myself thinking about some of my favourite teachers the other day, and the first question I asked myself was: ‘I wonder they’re dead yet? Hope not. But, they must be pretty fucking old by now.’

4. There are more Divorces than Weddings.

5. Cleaning: I hate cleaning. In my 20s, my version of cleaning was to squirt enough all purpose cleaner on the counter so that my apartment would smell vaguely disinfected, then tell I’d tell visitors that I hadn’t had a chance to finish cleaning. Now, I have learned to view my home through a lens of shame, and that I have to wash away that shame–especially that bullshit that accumulates on the baseboards– in order to alleviate it.

In my 20s my messy apartment gave off a sense of girlish charm. Now it tells a different story: it says that I’m a slob.

Full disclosure: I have never scrubbed my baseboards. Living with a little shame is healthy, and also fuck cleaning my baseboards. I’d rather just write about how they make me feel. Also, in my 20s I probs didn’t even know what a baseboard was… or thought it was some sort of cool sound system enhancing equipment in da club.

6. Slang: I referred to some rich guy as a ‘baller’ the other day, and I immediately felt as cool as my mom looks when she coyly throws down a ‘Wayne’s World’ “not”.

When I hang out with people in their 20s, I don’t know what they are saying, but I try to pretend. Honestly, they talk about drugs that I have never even heard of.

7. Street Harassment: Some Asshole yells “sluts” at you and your girlfriend as he hangs out of the backseat of his loser friend’s car.

Instead of being offended, you both think “we still got it.”

This short list should provide you enough clues that you might be approaching middle aged suburban womanhood.

Of course there are a wide array of other clues such as those associated with fear, regret, an intense sense of urgency, and other emotions of an existential nature that should be taken as evidence of (approaching) middle age.
*takes swig of reasonably priced malbec, removes bra and cues up season one of The Good Wife… again.*