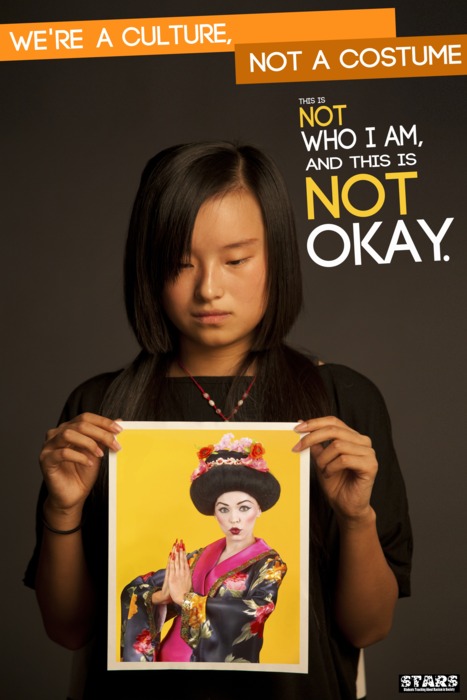 Memoirs of a (White Girl who dressed up as a) Geisha

White people like this time of year. We pick apples, wear sweaters and according to my facebook newsfeed, we visit pumpkin patches. For the most part, we are pretty happy.

That said, it is precisely this time of year that we are also likely to fuck up. Halloween, as many critical Internet dwellers have pointed out is a holiday associated with racism in the form of cultural appropriation and misrepresentation. There are plenty of photos available through social media depicting white folks dressed up a Mexican people, Arab people, Asian people and Black people. And there is so much evidence that this issue is not disappearing.

But, there are lots of whitesplainers  (like those quoted near the end of  this post) that are happy to smugly defend the practice of turning the racialized Other’s culture into a costume by reassuring those affected by the phenomenon that they are ‘taking themselves so seriously’, while others pull the “reverse racism” card arguing that it is actually racist to prevent white people from appropriating the cultural symbols of the ‘Other’, just because they’re white. I think that is definitely my favourite rebuttal. Yes, the implication is that resistance to colonialism is actually “reverse racism”. It takes a keen social scientific mind to spot that historical blind spot. Quick, some add “reverse racist” to Ghandi’s Wikipedia page.

To be clear, I think that it is irresponsible to dress up like someone from another culture. It is disrespectful, racist, and completely irreverent (and not irreverent in a funny way).  In fact, I feel pretty passionate about the whole thing. Whenever I teach in the fall semester, I like to discuss this issue, and assign an exercise where my students are encouraged to notice and critique racist (and sexist) elements of Halloween costumes.

But, despite my current politics regarding the matter, I have a confession; in 2003 my friend and I dressed up as Geishas. I had just finished reading Arthur Golden’s 1997 book, “Memoirs of a Geisha”, a book that would be impossible for me to get through today without squirming and cringing with feminist anti-imperial angst. But, at the time I liked the book, and my friend and I felt that the costume was appropriate, and perhaps even a little feminist.  Of course looking back, it was anything but.

Over the past few years, I have been actively trying to forget the whole thing, but this brand of lifecourse cognitive dissonance is persistent and embarrassing.  So, it is clearly something that has to be resolved. But, how does one repent for their imperial gaze? First off, whitesplainations are out of the question, because they are riddled with privilege, the denial of racism and colour blind racism. I’m also not going to simply apologize, because that isn’t productive or sincere either. Just ask Paula Deen.

I think that the best way to approach a mistake like this (and maybe ‘mistake’ isn’t the right word, as it sound too innocuous in the situation) is to recognize why I felt entitled to use (incorrectly) elements of other people’s culture, which I honestly knew nothing about (except for the ‘information’ I gleaned from some fictional account produced by some white dude).  It was my white privilege that uncritically drew me towards a “memoir” of a fictionalized Japanese woman written by an American male in the first place. It was my fascination with the culture of the Other that lead me to mimic rather than actually learn about Japanese culture and Japanese women. It was my white privilege that allowed me to go several years (which were spent in Masters and PhD programs… In Soci-fucking-ology) without thinking about my own role in cultural appropriation, and the exoticization of Asian women.

I have read about the problematics associated with identifying as an ally. For a long time, I felt that it was acceptable for a non-racialized person to call themselves an ally. I now see that this is indeed problematic. Especially considering that for quite a few of those years after 2003, I would not have hesitated to identify as an ally in terms of ‘race’ relations. And, obviously, I was not an ally, I was actively participating in the imperial gaze like a big jerk.

I dressed up as Tyra Banks once. My whitesplaining is that I really, really liked America’s Next Top Model. So, if Tyra was white, I’d be okay to dress up as her? You definitely have me thinking MCG!

But I was also a Geisha once. Ew. I cannot believe I dressed up as if the sale and slavery of women is okay. That one I feel dirty about…