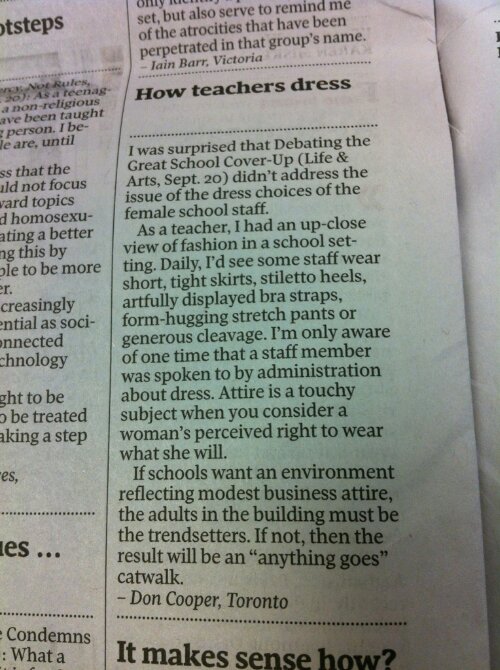 Among my limited talents is the ability to provide theoretical validation to just about any a feelings that my friends might have. If they get rattled by something that they see, read or experience, they sometimes come to me to help them put their feelings into productive commentary. This is particularly true when it comes to social justice issues. Through my academic training I have had the privilege of gaining access to terms and language that help me frame my experiences in the social world. It is a pleasure to help them out in this way.

I recently got together with a girlfriend who teaches in an elementary school. She was reading the editorial page of the Globe and Mail, where she saw a comment written in reaction to an article called “Debating the Great School Cover-up”, which discussed students’ clothing. She photographed it because she found the comment frustrating, judgmental and intrusive. She then sent it me.

This is an issue that many women in professional spaces confront. In a culture that encourages all of us to objectify women and perceive their bodies as objects of desire, but also as objects of disgust, it makes it difficult for women to perform their femininity appropriately. Folks like Don Cooper reinforce this idea that our bodies are inherently sexual, and that it is our job to erase any trace our secondary sex organs in order to be taken seriously. Otherwise we make ourselves into distractions.

I am a little surprised that the Globe and Mail would publish such a misogynistic comment (just kidding, I’m so not surprised). But, it really is sexist. First of all, Mr. Cooper you are not talking about attire as much as you are talking about our bodies. No shit: it is “touchy” when an institution or a person decides to interject in your presentation of self. And, are you seriously suggesting that women merely “perceive” themselves as having “the right” to wear what they “will”? This right is no more “perceived” than the right to vote or have a fair trial. It is a right, regardless of perception, and to suggest otherwise is more than just a little troubling to me.

Perhaps we should encourage people like Mr. Cooper to re-evaluate his “perceived right” to comment about how his colleagues present their bodies.

It takes a good sociologist to articulate why I have feelings of anger when I read something like this. I would never have caught the “perceived right” comment either.

I have a lot of perceptions of what my rights are, but according to Don, I am way off — aren’t I?

And now, finally, I know why I’m upset. Thanks MCG!

You were the hammer Don was the nail.

Excellent closing statement. “Perhaps we should encourage people like Mr. Cooper to re-evaluate his “perceived right” to comment about how his colleagues present their bodies.”

I wonder if he thought about what that article may do for his perceived image.

While I agree with your objectification analysis, I have a slightly different take on the “perceived” comment. To me it reads like a straw man argument because he’s blurring the distinction b/w workplace and casual settings. Who actually argues that anyone (male or female) has a “right to wear what they will” in the workplace? There may be debate around what those “standards” should be (enter your analysis), but I suspect most people are at peace with the existence of a workplace dress code. Yet, he wants to make it sound like women en masse are sporting Friday night club wear to teach kindergarteners. To me, the grand scale case he’s trying to make is simply not believable. Instead, it sounds like he’s citing some extreme (and probably greatly embellished) anecdotal examples to argue against a position that nobody actually asserts.