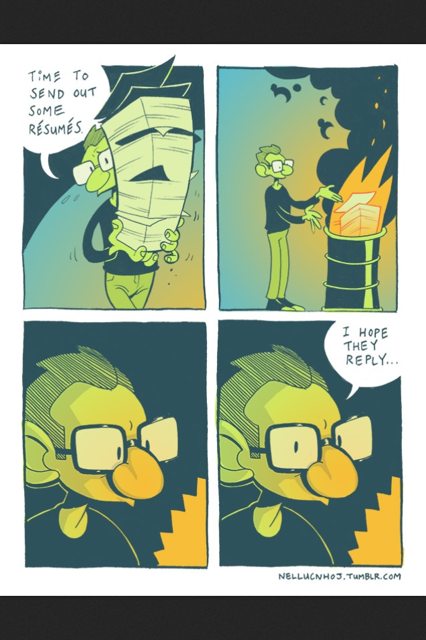 Stats, Lies and my Irreparable Relationship with Job Banks

Lies, Damn Lies, and Jobs Numbers: Canada Edition <– this came across my feed the other day, and it got me all fired up.

Basically, the post highlights how the Canadian Conservative government manipulates statistics to mislead potential voters into thinking that they have created jobs. However a more rigorous analysis reveals this rhetoric to be “damn lies.”

Sure, the stats nerd in me (well, the one that I once aspired to be, but never really managed to go full nerd, because I’m awful with numbers) was offended, due to the misrepresentation of statistics, and general lack of transparency.

But, the part of me that is chronically underemployed (which I guess is technically the whole me) is far more perturbed.

I have this theory that deep inside, whether they would admit it to themselves or not, some fully employed folks find themselves a little envious of my position. While many of them have been working hard and steadily, in a more or less linear field, here I am with buckets of education, and no discernible future, navigating my career like a gibbon swinging from contract position to contract position. I’m sure that they recognize that this is an absolutely terrifying career path (if you can call it a path. I feel like that’s a bit of a misnomer, considering that neither of my feet are planted on the ground, and there is nothing really guiding my career trajectory), and that the financial insecurity and general existential and identity problems that go along with it are a real drag.  But, I also think that it opens up a space for some fantasy about their own lives… similar to how a securely and happily coupled, monogamous person might scope out some of the attractive faces on OKCupid, some fully employed people might engage in a similar form of vicarious tourism.

Just like every other un/underemployed person actively looking for work, I know exactly what they see- they see awesome jobs posted everywhere.

Early in my search for a new career, this was my favourite job bank. For any un/underemployed lefty, who is intent on finding a do-goodery job, this place is magical. They advertise awesome titles like, “Philanthropy Coordinator”, or “Women’s Efficacy Director”, or “Child Achievement Facilitator.”  They are posted by companies with provocative names like “Girls Rule”, or “The Equality Network”, or “(random woman’s name)’s Place”.

The job descriptions list sexy qualifications like, “having an intersectional lens is mandatory”, or “candidates must adopt an anti-oppression framework”. Some of the potential employers even required online applicants to write responses to complex essay questions. I would spend hours, optimistically and carefully writing responses. I would actually enjoy crafting my answers and cover letters.

But, this love affair with charity village didn’t last very long. Despite the 100s of resumes and cover letters I submitted, I failed to elicit one response prepared by a human being. I learned very quickly that many of these employers probably had no intention of hiring an Internet rando… but likely had an internal candidate in mind.

In any case, job banks consistently irk me because they give the impression that there are plenty of opportunities, when in reality, these opportunities do not exist. These create an illusion- the illusion that there are 1000s of jobs out there, available, begging for applicants. This is dangerous, because it undermines people who are under/unemployed. It makes it look like our employment issues have less to do with lack of opportunity, and more to do with individual laziness, lack of resourcefulness, or some other personal failures.

So, when I hear the inauthentic rhetoric around job creation, I know that it validates the false impression that the economy is healthy and that jobs are available. The stigmas that I, and people like me already face are given more credibility by shitty skewed statistics presented by the Harper government.

Finally, just to bring this conversation back to ‘vicarious tourism’ and online dating profiles, I’m sure that there are parallels to be found here. I’m sure that like Charity Village, OKCupid also helps bolster the fantasy that there are more shining ‘opportunities’ out there for single men and women than exist in actuality.

In my experience, I have always found it way easier to find a boyfriend on the Internet than it is to find a job. I often think about how this is so bananas- I can find a human being who is willing to be physically, emotionally, intellectually and even financially intimate with me and no one else but me, and ultimately fall in love with me, but I can’t find a company, who is willing to spare 20 minutes in the form of a job interview, to discuss potentially paying me slightly more than minimum wage to answer phone calls for them.