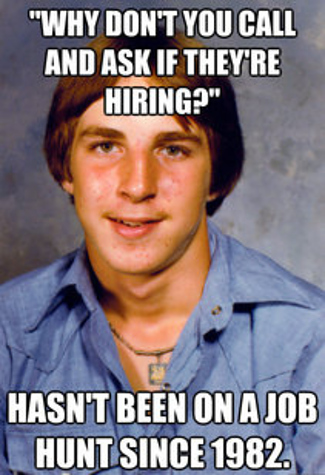 Unemployed people hate mondays more than you do.

Did I mention that I don’t have a job? The holidays are officially, officially over, since it is the first Monday after New Year’s Day. This is the first time in over a decade that I haven’t been in an educational institution welcoming a new semester… the second semester when everyone stops trying, and no one gives a shit anymore. This is in deep contrast to first semester, when everyone is fresh, shiny and motivated. In fact, in the education industry, Labour Day is actually more like New Year’s Day and New Year’s Day is more like a Sunday after a weekend bender.

Anyways, for the first time in a long time, I’m not in a classroom, surrounded by girls in their late teens who treat legging as pants. It is not pleasant. In fact, it is pretty fucking painful. This, despite the fact that the weather is horrifyingly icy and the thought of leaving the house is scary.

Being without work is difficult at every time of year, but for different reasons. The financial aspect of it is beyond terrifying. Thinking about how I might pay my bills at the end of the month incites enough anxiety that my eyeballs begin to get a little wet. In addition to meeting my material needs, the isolation from my culture is increasingly troublesome. In fact, it is difficult to have an identity when you aren’t working.

“Me? I occasionally write a blog post that 3 people will read (me being one of them), but mostly I like to read lists on the world wide web.”

I get jealous of seeing ‘friends’ posts about dreading the upcoming work week.  I wish that I could hate Mondays again for those reasons, instead of hating them because I miss the feeling of being normal on the weekend. I get to pretend that I’m like everyone else. On Mondays, I go back to feeling… quite frankly, like a loser or a failure.

So, why not just get a job, right?

I’ve had friends and former partners who have struggled with employment. I was always extremely sympathetic and supportive, but I was secretly kind of judgey. I definitely felt that I would never find myself in a position where I couldn’t find work. There are 100s of job postings, I literally graduated at the top of my undergraduate class, went on to do great work in graduate school, and successfully taught dozens of college courses. I also own two very sharp looking blazers. Surely finding a job would not be hard if I ever found myself without work. Besides, I have a pretty extensive network of successful friends, and a strong work ethic. Employers would be lining up to get a piece of this on their payroll. Easy peasy lemon squeezy, right?

It has been humbling to discover that I was wrong.

I think that a great deal of my situation can explained through structural issues. The meme, “Old Economy Steve” helps to illustrate this. Adam Weinstein’s great post “I’m Gen Y, and I’m Not a Special Snowflake. I’m Broke.” not only articulates the frustrations that millennials encounter trying to survive economically, but also provides us with a way of beginning to understand the larger forces that prevent economic independence from occurring.  By the way, I realize that I am liberally defining myself as a “millennial” considering I’m born in 1980, but the balance of my bank account represents some pretty hard evidence suggesting that I can safely identify with this generation.

Also, I realized relatively early in my search that applying to online job posting mostly lead you to a dead end. Many organizations post positions online, but only as a formality. Many times, they have an internal candidate in mind, and have no real intention of interviewing external candidates. This has been confirmed to me by a hiring manager. But, I knew this after applying to many positions on Charity Village, Workopolis, etc. and despite being perfectly qualified, my applications were never acknowledged. I have even apply-cried (where you cry tears of defeat while composing your cover letter) to jobs I would have been qualified for when I was in high school. Even then, no response.

So, this really leaves people in my position with networking. This means that you have to assess the types of careers that your family and friends have, and see if they are willing to allow you to exploit them to use their resources. If you are lucky, some of them will. Fortunately, I have some people doing that on behalf, and even still the process (interviews, etc.) moves at a glacial pace.

Over the holidays, I did ask around at the mall if they were hiring. That was weird. Turns out they don’t do much hiring after the holiday season. *secretly relieved*

So, please trust me when I say that this is a challenging process. If you’ve never gone through it, you likely have the privilege of thinking that it couldn’t happen to you, or that if it did, you would have a better strategy. If this is the case, I really hope that you are never in a position to find out just how difficult it is.